The sale will be over once the timer hits zero!
0
Days
0
Hours
26
Minutes
0
Seconds

Made from a mould taken from a good quality interior lens (Therefore some imperfections can be expected). 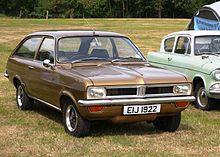 The HC Viva (1970–79) was mechanically the same as the HB but had more modern styling and greater interior space due to redesigned seating and positioning of bulkheads. It offered 2- and 4-door saloons and a fastback estate with the choice of either standard 1,159 cc, 90 tuned 1,159 cc or 1,600 cc overhead cam power. No 2.0 GT version was offered with the new range, although the 2.0 became the sole engine offering for Canada, where the HC became the Firenza, marketed by Pontiac/Buick dealers without the Vauxhall name. The cloned Envoy Epic was dropped as Chevrolet dealers now carried the domestic Chevrolet Vega. The HC was pulled from the Canadian market after two model years amidst consumer anger over corrosion and reliability issues. A class action lawsuit launched against General Motors of Canada by dissatisfied owners was not settled until the early 1980s.

The American influence was still obvious on the design, with narrow horizontal rear lamp clusters, flat dashboard with a "letterbox" style speedometer, and a pronounced mid bonnet hump that was echoed in the front bumper. 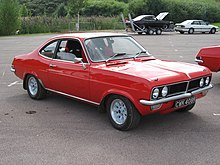 A coupé version called the Firenza was introduced in early 1971 to compete with the Ford Capri and forthcoming Morris Marina Coupé. It was available in deluxe and SL forms, with the latter sporting four headlights and finally resurrecting the missing 2.0 twin-carburettor engine from the HB Viva GT.

The overhead cam engines were upgraded in early 1972, the 1.6 becoming a 1.8 (1,759 cc) and the 2.0 (1,975 cc) twin carburettor became a 2.3 (2,279 cc). At this time, the Viva 2300 SL and Firenza Sport SL did away with the letter-box speedometer and substituted an attractive seven-dial instrument pack. Firenza SLs had a two round-dial pack, though all other Vivas and Firenzas stuck with the original presentation.

In September 1973, the Viva range was divided, the entry 1,256 cc models staying as Vivas, with an optional 1.8-litre engine if automatic transmission was chosen.

The 1.8- and 2.3-litre models took on more luxurious trim and were rebadged as the Magnum. At the same time, the Firenza coupe was given a radical makeover with an aerodynamic nose and beefed up 2.3-litre twin carb engine mated to a ZF five-speed gearbox, turning it into the HP (High Performance) Firenza.

The Viva was again revised in 1975, with trim levels becoming the E (for Economy), L and SL. The E was Vauxhall's answer to the Ford Popular and was first offered as a promotional edition two-door coupe using surplus Firenza body shells, before becoming a permanent Viva model in two-door saloon form. It was the only Viva to still have the strip speedometer after this as the L and SL adopted the Firenza SL's two round dial set up. As of the autumn of 1975 the 1800 engine was also upgraded, increasing power from 77 to 88 hp (57 to 66 kW; 78 to 89 PS).[15]

For 1977, the SL was replaced by the GLS, essentially marrying the plusher Magnum trim and equipment with the base 1,256 cc pushrod ohv engine. These models all had the full seven dial instrument panel, velour seating and Rostyle wheels, among many other upgrades.

Viva production was scaled down after the launch of the Chevette in spring 1975. Originally a three-door hatchback, the Chevette offered two- and four-door saloons and a three-door estate in 1976 that all usurped the Viva's position as Vauxhall's small car entry.

The Chevette hatch was also sold as the Opel Kadett City, but the Viva remained on sale until the later part of 1979.

The Viva was effectively replaced by the new Vauxhall Astra, a variant of the front-wheel-drive Opel Kadett. By that time it was dated in comparison with more modern rivals like the Volkswagen Golf. Production ceased at a time when European manufacturers were making the transition from rear-wheel-drive saloons to front-wheel-drive hatchbacks in the family car market.

The passing of the Viva marked a significant moment for Vauxhall. The HC Viva had been the penultimate car to be completely designed by the Luton-based company, the 1972 Victor FE range being the last UK designed Vauxhall. That car was replaced in 1978 by the Opel Reckord-based Carlton, so the passing of the Viva in 1979 marked the end of UK designed Vauxhall production, with all Vauxhall cars now effectively being badge-engineered and German designed Opels, or in the case of the 2004 Vauxhall Monaro, a rebadged Holden.

The domestic market launch of the Viva HC coincided with one of the UK's periodic surges of debt fueled economic growth, and the latest Viva became Vauxhall's fastest selling new model of all time, chalking up its first 100,000 units in just  7 1⁄2 months.[16] 640,863 Viva HCs were produced,[17] making combined Viva production top the 1.5 million mark. The millionth Viva, a gold HC, was driven off the production line by a national politician amid much celebration on 20 July 1971.[18] Although most Vivas were produced at Vauxhall's Ellesmere Port plant in northern England, the company's production lines were by the standards of the time flexible, and the millionth car was a product of the Luton factory.[18] However, within seconds of the Millionth Viva's completion at Luton, Ellesmere Port celebrated what was described – over-optimistically as matters turned out – as the first Viva of the second million.[18]

In New Zealand, the Viva was originally built in two- or four-door sedan and wagon/van form with 1,159 cc and 1256 cc engines. A batch of 1.8-litre models, some with automatic transmission, was imported from the UK in 1973/4 when the government temporarily relaxed import restrictions on built-up cars as local CKD plants could not meet demand. The 1.8-litre engine and automatic transmission later were added to CKD assembly and the entire range was renamed Magnum in 1976. This had the four headlight nose and improved trim and equipment, such as a two-dial instrument pack and heated rear window, in a bid to overcome the Viva's basic car image – its original place in the GM range now taken by a newly launched, wide range of locally-made 1.3-litre Chevettes – and slowing sales. The Magnum also had an 1800 engine option, often teamed with automatic transmission.

A version of the Viva HC, called the Chevrolet Firenza, was produced in South Africa, where it offered the small British four or a locally built Chevrolet 2.5-liter engine. After a 1975 facelift and some changes to the lineup, these lost the "Firenza" badges and were sold simply as the Chevrolet 1300 and 1900. The car was facelifted, with a new front design which mimicked that of the bigger Chevrolet 2500/3800/4100. These were originally only four-door saloons, but South Africa also saw a three-door hatch developed off this rather than taking on the then new Chevette/Kadett City; this was first shown in June 1976 and the first car rolled off the production line in August.[19] This mixture used the T-car's rear hatch and taillights, but was a Viva ahead of the B-pillars. The arch around the rear hatch opening was considerably stronger than the T-car's, to suit local road conditions. Also, the 57 L (15 US gal) was larger than one would expect from a car this size, to suit local road conditions and petrol sales restrictions. The split rear-seat folded down. With the new Chevrolet Chevair recently introduced, cost prohibitions made such a creation a better proposition than bringing in an all-new car.[20]

Local parts content was high from the get-go, with some Hatch models reaching 71.15% right away.[19] The car was 3,886 mm (153.0 in) long, 252 mm shorter than the saloon. Since the Hatch's bodyork was a modification of an existing design, some compromises were necessary and the load area was particularly shallow. Another problem, common to all 1300/1900s, was the absence of a universal key - period road testers offered many complaints about requiring no less than four hard-to-tell keys.[21] 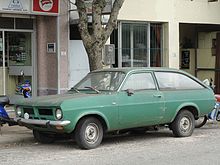 Grumett Indiana, made in Uruguay

Several cars based on the Vauxhall Viva were produced from 1970 until 1976 by Grumett in Uruguay.

They came in different models, including a double-cab, two-door pick-up, with different Vauxhall and Opel engines. The body was fibreglass; some original Vauxhalls were imported to serve as moulds. Mechanicals were either Vauxhall or Opel, depending on the batch.

At WAY OF LIFE, we truly offer the most stunning, trendy highest-quality products in the world.

We will do WHATEVER it takes with outstanding customer service support to assist everyone as we highly value our customer satisfaction with absolute ZERO risk.

We make sure that every customer is 110% satisfied in every aspect with 24/7/365 FAST SUPPORT!

By signing up you willl be first to know about all of our new releases first!

We love gadgets and we know how to bring you the best ones! The ones that give us more time to spend doing the things we love.

Smart Education - to set you free

Added to your cart: